RV Hell: Driving off without your wife!

It was a steady downpour that day in rural Mississippi. We were on a four-lane highway in our Seneca 36 FK towing our dozer yellow Jeep Wrangler. We had been having trouble with our automatic leveling system since leaving the last campground. It seemed like every time we went through heavy rain we would get an alarm warning and a light flashing in our auto leveling control box. We called the manufacturer for advice, but a couple of fuse resets later the beeping and flashing light were still there. The best guess was that water was getting up into the jack activator sensors and causing a short. They also told us to watch out for our jacks descending as we drove.

We were more than a little nervous when we heard the alarm system go off again after we hit the rain in rural Mississippi. I pulled off to the side of the road and asked my wife to check on the leveler control box located just above the stairs to the outside. I knew that if the alarm was going off and the light was flashing simultaneously, we had a problem. One or more of the jacks could be slowly descending on its own from gravity.

We sat idling beside the road as my wife walked back to the panel and opened up the panel door to look for that telltale flashing red light. When she told me it was on, I yelled back that I would have to drive on up the road to find a better place to stop. So off we (at least I thought we) go down the road. About five miles down the road, I found a 7-Eleven that had a large enough parking lot for me to pull both RV and Jeep off the road.

I ran into 7-Eleven and asked the manager if a petite blond had just walked into her store. She said “No, but we noticed that you drove in with your side door wide open”.

Then panic struck! The control box my wife was looking at was as the back of the bus directly in front of the stairwell leading to the outside door. “Oh my God!” I thought. “She fell out when I took off” and perhaps into the ditch that followed the road for a number of miles.

I started running down the side of the road looking for my poor wife who might be lying face down in the ditch. My heart was pounding. I had run about a mile and half when I suddenly saw a local cop pulling out of a side road ahead of me. Waving my arms wildly and yelling, I flagged him down. Out of breath, I ran over to his SUV and haltingly told him that my wife had fallen out of the RV and I was afraid she might be in the ditch injured or even worse.

With a somewhat skeptical look, and with his down-home accent, he said, “Get in the car son and take me to your RV”. On the way, I reviewed my story that my wife had been standing at the top of the steps in the back of the bus when I started to drive off and then I saw the door wide open at 7-Eleven. I told him my wife did not respond to my calls and that she had clearly fallen out of the RV!

When we got back to the RV, he went to the back of his cruiser (that now had the flashing lights going) and pulled out a long stick with a mirror on it. He then proceeded to walk around the RV with the mirror pointed underneath to see if I had dragged my wife down the road under the RV. As he did his inspection, my life passed before me. I was now convinced I had killed her.

By now, another local police car pulled in followed by a State Highway patrol car; all with sirens on and lights flashing. This clearly got the attention of the dozen or so people in the 7-Eleven who then came outside to watch the show.

My wife had a very different experience and perspective on this mishap. First, she did not fall out in transit and she was not in the ditch. Unbeknownst to me, she had gotten out of the RV after looking at the flashing panel light at the top of the steps to see if something was amiss with our Jeep. She is not very mechanically inclined so she did not know that the Jeep actually had nothing to do with the jack problem. Nonetheless, she stepped outside the rig with a yell to me that she was stepping out to look at the Jeep. With the front-end diesel clatter, I could not hear this very important tidbit of information and took off down the road.

Imagine her surprise as she hears the RV shift into gear and head off into the mist. “Where the hell is he going?” she said to herself. He obviously doesn’t know that I’m not in the coach. Unfortunately, her cell phone was.

She waved and yelled but there was no way she could get my attention as I thought she was still in the coach. At the time of this more than painful incident, my wife was having serious back problems and some difficulty walking far. She is also resourceful. Despite her back pain, she crossed over the four lanes of highway in the rain to find a place to make a phone call. Luckily, she found a rural….and I mean rural….Mississippi used truck dealer.

She walked in soaking wet and calmly asked if she could borrow a phone since her husband had just driven off without her in our RV. One of the people at the dealership took a long look at her and then slowly said, “Why honey, did you have a fight with your husband? She said “No, but there will be one!”

Back at the 7-Eleven, we had quite a happening going on. The three police officers were talking to me about next steps when suddenly from inside the RV, I heard my cell phone ring. On the other end was my wife! Her first words were “Where the hell are you?” in a surprisingly calmer voice than I would have exhibited had the tables been turned.

Thank God! I had not killed her. She was alive and well, very wet, and making new friends at the truck dealership. What a relief! When I told the officers and the crowd of about 30 standing outside the 7-Eleven that my wife was safe, you could hear a collective sigh of relief. The crowd disappeared almost as quickly as it had formed.

It was difficult for me to get back to her in the RV due to the 4-lane highway and very few crossover points. Luckily, one of the officers volunteered to pick her up at the truck dealership and return her to the RV.

When she got back to the RV, she saw how upset I was and moderated what could have been that blood chilling school teacher look that I have only seen a few times in my life and never wish to see again. As the police were packing up to go to other calls, I thanked all of them for coming so quickly and trying to help. As the original officer was leaving, I jokingly said, “You don’t think the judge would have believed that she fell out do you?” He smiled and said, “No son, I sure don’t, but I got a hell of a story to tell my kids around the dinner table tonight.”

I hoped that this ended our little life on the road saga. My story of misdeed, however, has not really ended. I have paid dearly and am still paying for this
misadventure. I have paid financially, emotionally and physically. However, the punishment gets less each day as I work my way back into absolution.

This story, like the other ones we are collecting for this site, has a teachable moment. Since this misadventure, we never travel without walkie-talkies with at least a 25-mile range. Now, neither one of us steps out of the bus while we are on the road without a fully charged walkie-talkie. Even when we stop to shop or visit a rest stop, we take these invaluable tools with us.

There are many places on the road where cell phones either do not work or have tenuous connections. We encourage all of you to invest in walkie-talkies….this cheap but incredibly important marriage saving tool. If my wife ever feels uncomfortable in a road stop due to some suspicious looking folks, it only takes her a second to press a button and I can hear her. This takes a lot less time than dialing on a cell phone that may not connect. This relatively cheap instrument could have made my possibly life long sentence of atonement much less likely. 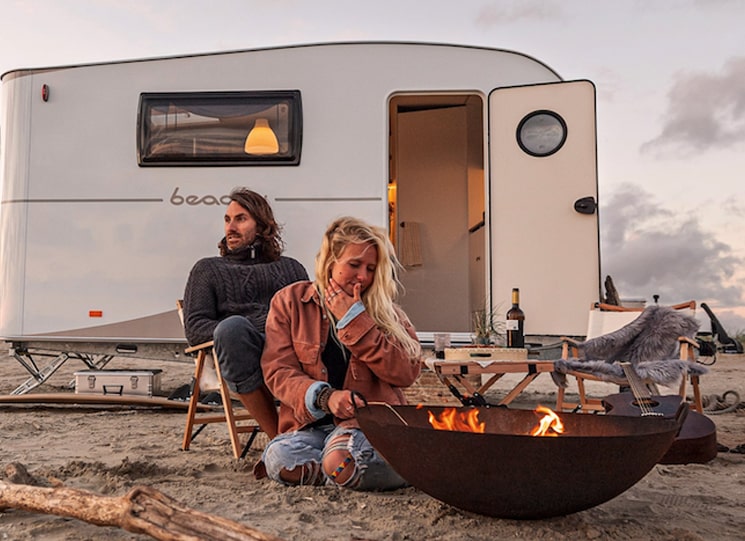